"This guy's a huge, fucking mess!"

The men in bright yellow t-shirts with the word 'Security' written on the chest watch the man in the rubber dinosaur mask flail wildly. Shortly after Sahara threw him overboard, they were able to fish him out of the ocean only for him to tackle an inflatable shark into the shallow end of the pool.

Dave wraps his monstrous arms around it, but his weight plus gravity cause him to sink underneath it. He holds tightly before he begins to panic and flail.

"Should we pull him out?"

The dinosaur manages to release himself, thrusting free of the water. He draws in a breath and erupts with a mighty roar. A larger guard with the goatee, who looks to be in charge, crosses his arm and leans into the wall.

The group watches as Dave jumps back on top of it, gnashing at it with his rubber fangs, unsuccessfully. 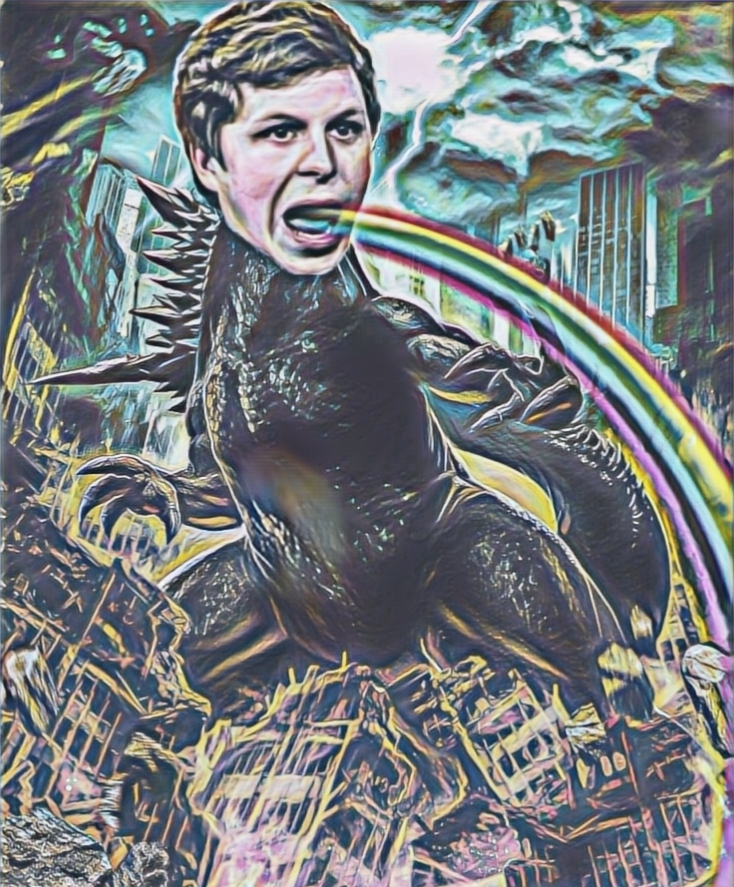 "Get the fuck out of here!"

They disembark Dave with a shove. After a stray volleyball dazed the already dazzled dinosaur, the crew was able to drag him out and lock him in his room for the remainder of the trip.

The Dinosaur stares out from the docks at the city: it was minuscule in its mind. It roars and rushes forward: it was time for a rampage!

One of the dock workers tosses his hands up in protest as Dave shoves over a safety cone. He ignores the protests running full speed at the lowered toll booth arm. Dave crashes into it with his full weight, knocking him directly on his back.

The mask backwards, he kicks and squirms on the ground like a turtle. Finally upright, the dinosaur twists it's head back around. He kicks over another cone, carefully ducking under the arm, before running towards the city.

It was time for a rampage!

The raptor roars as it rips through the city. Its claws slash. Its jaws snap. Its feet slam into the streets, shattering the concrete beneath.

Cars honk and tires screech, but it flips them with little effort.

"Get the fuck out of the road!" Dave had in his hands the front bumper of a yellow cab. Traffic began to pile up behind it, their horns already blasting. Struggle as he might, the man in the mask was unable to move it.

The taxi blares it's horn again. He releases its bumper, shakes his fists, and runs across the street.

It roars! The rampage was real!

It was invincible! Powerful! Unstoppable! Nothing could stand in its way!

It crashed. Bricks and concrete crumbled down at its feet. The beast bashed its body against the buildings.

They began to budge.

They began to topple and tumble and…

"Get the fuck out of my store!! Are you insane? I'm calling the cops!!" A man with a wispy moustache in a CVS polo shrieks, grabbing the phone. "You've made a fucking mess!!"

The city he destroyed is actually a small drug store and the buildings he leveled rows and rows of shelves that sit on their side. It was done.

When the cops came, Dave did not struggle nor fight. Why bother? He had won. They took him out in handcuffs, the man still shouting at him from the store front. He told Dave he would ‘never see the light of day again’. He'd be ‘locked up for a long time’.

The Dinosaur didn't hear him though.

He had won: the city lay at his feet.

Dave sits in the alleyway beside the FightNYC tower. He has placed a cellular phone in front of him on a crate, the camera application recording him as he speaks.

"Michelle...I'm gonna…" he hesitates, "definitely kick- punch you in the…butt."

"Punch you in the butt?"

Startled, Dave jumps and turns to the voice. A short woman with blond hair, shaved along the sides stands at the door. She has on a pair of coveralls and there is a rolling cart of trash just behind her.

"Dave?"Although he recognizes her, he draws a blank on her name. After a moment, she helps him out: "Alice."*

"How long have you been listening?"

"Long enough to hear you just say your plan is to punch a woman in her butt."

She pushes away from the door, casually walking around him.

"Yeah, her husband? Bit of a psycho. You may not want to touch her butt."

"What about her face?" He tries. Alice stops pacing.

"You're gonna punch a woman in her face?" She asks, mock offended.

"Her…" he considers before saying weakly, unsure of the right answer. "Arm?"

"You've never done this before, have you?"

"Can you tell?" He says shyly.

Alice laughs, shaking her head, "Honey, everyone can tell."

"That bad?" He bites his lip, pretending the world didn't watch as he was launched off the side of the cruise ship.

"Give me a hand?" Dave moves from his makeshift seat and helps her empty the large rolling can into the dumpster. Upon setting it down, she looks him over.

"You look different. Did you shower?"

"Prison changes a man." He says. She cocks an eyebrow.

"You were in jail?" She asks, putting more mustard on the word 'you' than he would have liked.

"Yeah. Well, kinda: New York." he offers as an explanation.

"Yeah…" The two share a brief silence as they contemplate the deteriorating state of the New York justice system.

She smiles suddenly and steps past him, scooping his phone up off the crate. Alice focuses the frame on his face.

"What are you doing?"

"I'm going to help! Consider me your coach."

He nods. It couldn't hurt, after all, he did just threaten to punch a woman in both the arm and buttocks region.

"Let's start with something like...oh! Tell the world your truth! Say something like, oh hey I am Dave, I'm an asshole in a mask."

He begins to respond, but then considers her words more carefully.

"Dave, I'm kidding. Just...speak from your heart you know...talk about your journey."

Dave looks down at the mask, rolling it between his fingers.

"Millions of years ago, my kind wandered the Earth…" she turns the camera away and he stops. "What?"

"What the fuck was that?" she asks.

"The history of dinosaurs?"

"Nobody is there for the mask, Dave," she aims it once more in his direction. "They are there to see you. Talk about you."

He looks at the mask and then at her.

"No, I definitely think they're there for the mask." She silently points at the camera. "Okay so me and my friend were in this bodega and I found this mask. I thought it was pretty cool, so I started-"

Alice clears her throat, interrupting him.

"Maybe let's skip ahead? Tell me the plan for the match."

He pauses for a moment.

"You sure about the mask?" He holds it up into the frame.

"I'd like to see you do better…" he mutters to himself.

Alice turns the camera off and looks him over. She stomps over to him and snatches the mask, shoving the camera into his chest. She walks a few feet away.

"Record it," she says as she turns her back to him. Alice slides the mask over her head, turning slowly back his way.

"Michelle Moore. You have done well for yourself here in New York and you should be proud. Proud of what you've earned, proud of what you achieved, and proud to say that on Monday night you were defeated by the hands of Dave."

She balls up her fist, gazing at it briefly before looking back into the frame.

"Now, you may look at this moment as a mark of shame, but I don't see it that way. After all, think of what I've done: I've survived. I survived being thrown off a boat. I survived being stuck in an elevator with that lunatic Sahara. I've even survived Cataclysm itself: extinction."

She turns and looks up, possibly at a meteor in her mind, possibly for dramatic effect.

"And I'm still here and I'm still fighting and now…" she points to a finger at the frame, "I'm coming for you, Michelle. Let me teach you about survival."

Her fist touches against the side of the mask.

"I want you to do your worst: punch me, kick me, throw me off the top of the tower. Hit me with a chair, a bat, a chain, because Michelle you're gonna need everything you can put your hands on to prevent me from Jurassic Parking your ass on the mat. Let me show you first hand, then fist, then one, two, three what it takes to survive."

Underneath the mask, Alice smiles.

"And if your little boy toy Brandon Moore wants to get involved?

"Wait what?" Dave says from behind the camera.

"I'll pop him with a prehistoric punch that will send him flying back to the Stone Age. Maybe then he'll finally meet someone around his reading level."

"You cannot say that!" He presses stop on the phone.

"Okay, fine."  She motions for him to continue recording which he reluctantly does. "Michelle, it's time you learn about survival! I'm coming for your butt and I'm gonna chomp it and bite it and tear it to pieces cause just like your husband, I'm just an asshole in a mask."

Dave stares at her blankly from behind the camera.

"Survive...if you can!!" She rushes towards him, her arms high in the air.

"Okay…" Dave stops recording once more as she laughs, pulling the rubber dinosaur mask from her head. A few strands of blond hair stand on end. She holds her hand out for the phone.

She plays it back as he watches smiling brightly. As it finishes, she begins to type on the phone.

"That was pretty good. I don't know if I can do it as …” He pauses for a moment as he considers his words, “...well but I kinda have the idea.”

He takes the mask and prepares to put it on, "Alice?"

She does not respond. He watches as she continues typing on the phone. Normally, that wouldn't be out of the ordinary...but that was his phone.

"Alice?" He tries once more.

She finally looks up from the phone, handing it back to him.

"To the world! Check it out!" She points to his phone where she has uploaded the phone to a YouTube account. It already had a thousand views. His jaw drops as she turns and takes hold of the trash can. She waves at him, a large, mischievous smile on her face. "See ya around, Dave."

Still in shock, he answers on instinct. "Yeah...see you around…"

The door clicks shut and he looks at the phone once more. Three thousand views. He sits down on the crate, his head coming to rest in his hands.

"This is a huge fucking mess…"