Cry of the Crocodile 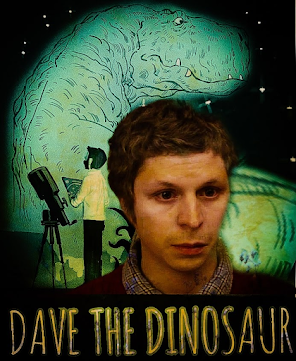 Once, there was a boy named Dave.

Something about being a dinosaur made him feel brave.

The child wakes up with a scream.

He flails in the dark, tears falling from his face as he fumbles for his stuffed dinosaur. His hand scrambles desperately along the sides of the bed, his cries growing louder. Footsteps rush down the hall and the door bursts open.

The light flicks on.

His father, a man in his mid-50s with slicked back salt and pepper hair and an olive complexion. This gene skipped Dave who was by contrast very pale, freckled, and had a lump of red hair, shoved hastily to one side. He wipes his nose on the sleeve of his Ninja Turtle onesie.

"I can't find m-m-my dino-dino," Dave stammers, his face flush and covered in tears. He explodes in tears once more. His dad walks to the edge of the bed, flipping back the cover.

Dave turns to see his tiny red dinosaur. Wiping off his face, he pulls it into his arms and then curls into a small ball.

"Did you have a bad dream?" His father sits on the edge of the bed. He begins to tuck the boy back in. Dave nods. "It's okay to be scared buddy, but I'll always be here."

He tugs on the fluffy Tyrannosaurus small arm.

Dave nods quietly. His father sits quietly for a moment, looking over the boy.

"Will you read me a story?" Dave says suddenly. His father smiles.

"Sure bud," he turns to the bookshelf, "Which one?"

“Dad and the Dinosaur?” He says to his father.

"Nicholas-" his father begins but Dave quickly cuts him off.

"Dave was afraid of the dark outside his door…"

His father reads him the story of a young boy and his father, who he believes isn't afraid of a thing. The child wanted to be like his father, but he needed the assistance of his pet dinosaur. As he reads, young Dave begins to relax, opening his eyes only to correct his father when he dares call the boy, 'Nicholas'.

Upon finishing the book, he watches as his son rolls over and begins to snore. With a smile, he sets the book down on the nightstand, before doing his best to sneak out of the bedroom door.

“Hey Dad?” The boy groans sleepily. His father stops and turns back his way. “Can you leave the light on?”

"Yeah Dave?" His father looks over at him from the doorway.

"I do, but you know how I know everything will be okay?"

"How?" Dave pulls the dinosaur against this chest

“Because you're my brave little dinosaur,” his father says. He pulls the door shut and Dave falls back asleep.

Dave sits in a hospital gown in the FightNYC infirmary. His attire has been discarded, and likely burned, for his convenience. The staff, thinking a new outfit may be fitting a champion, has sent for new clothing. A man in a white coat with thinning hair looks over a chart in his hand.

"So Dave," begins the doctor, his brow furrowing, "How have you been feeling?"

He can feel his stomach gurgle, but that was nothing out of the ordinary. Dave shrugs his shoulders, catching the bottom of the apron before it rides up too far.

The doctor looks down to the chart and then back up at him.

"Have you been eating?"

Dave's stomach grumbles again, this time loud enough for the doctor to notice.

"Well according to this chart…" he pauses, considering his words, "You are underweight."

"Yeah? Where do you go swimming?"

Dave thinks about it for a moment. How would this man react to knowing he swam in the canals beneath their very feet?

"Right…" the doctor slides the small rectangular glasses from his face. He does his best to lock eyes with the wrestler who has suddenly found interest in the floor. "Dave? I have no better way to say this but to say it."

"What?" he tries to swallow but suddenly cannot remember how. The back of his neck grows warm.

"Where have you been swimming?"

"It's an infection…" the doctor fishes around in his pocket for something. "It attaches itself to your small intestine."

He goes on to describe the stages of the infection and what could happen if it goes untreated. Dave remembers how to swallow, just before forgetting again midway. He coughs and sputters on his own phlegm.

He does his best to nod. Everything else the doctor says is a distant chatter in the back of his mind. Giardiasis? How did he get that? A bottle is slid into his hand as well as a slip of paper, a prescription should he need it. He mutters his thanks and stands, his mind already through the door. A nurse hands him a bundle of clothing, but he just tucks them under his arm. He pushes the door open and makes his way down the hallway, towards his room.

"Dave?" He turns around to see the doctor standing in the doorway. His Bronx championship is in the man's hand. Dave scurries back and retrieves it. He offers another thanks before moving away. The voice calls after him.

"Be careful where you swim!"

In the distance, he can hear his mother and father screaming. Something shatters - more shouting in another room.

There's more slamming. His mom says something about another woman.

His parents' footsteps stomps echo away until he hears the front door open. Dave crawls to the window sill above his bed and pulls the blind apart just in time to see the white Ford Explorer roar to life. His dad turns to his window and he meets his father’s gaze through those horn rimmed glasses one last time before the car tears out of the driveway.

He can hear his mother crying.

She becomes muffled and desperate. Dave slides under the covers, pulling them up to his chin. His eyes fill with tears as he pulls the small red dinosaur to his chest.

Face covered in a layer of sweat, he looks around his championship room in the FightNYC tower. Moonstruck plays on the television across from him. He had taken a shower at the demand of the room staff and fell asleep after gorging himself on room service ravioli.

It was an immaculate room, complete with a jacuzzi, nestled against the window, and an incredible view overlooking the city, specifically the Bronx borough.  His giardiasis medication sits on the table beside him. He picks it up, pops a pill, and places it back down.

It wasn’t the infection running rampant inside him that caused him to wake up. It was that feeling of belonging in the back of his mind that he could never fully realize. It was the tail lights of the 1997 Ford Explorer as they disappeared in the distance. The cries of his mother as she soon followed, too lost in her pain to move forward.

"He needed a dinosaur."

The rubber mask feels familiar and inviting in his hand. He slides free of the covers, almost on autopilot. Shoes slip onto his feet and he can hear the door close behind him. His hand clutches the mask against his chest as he nods to the night security.

He stops, recognizing the voice. "Hey, I know you!"

The woman giggles and he furrows his brow in confusion, before turning to the cold night air.

Stragglers from their nights of independent revelry cross the man in pajamas without a second look. After all, it was New York City. He ducks into the alleyway beside the tower. Dave yells as something tiny darts up his leg.

Bugs are nothing to him.

Dave kicks his foot wildly, hoping to dislodge the foreign invader. After a brief dance, he looks at the mask.

And they eat manhole covers for lunch.

The cover slides free, the mask pulled down over his face. From the window another, a thin form with long hair, shaved on the side stands in the window.

Once, there was a man a man named Dave.

He drops into the sewer. There is the familiar hiss of a crocodile. Dave inches into the water. In the emergency lighting, he can see a pair of glowing red eyes swimming towards him.

Something about being a dinosaur made him feel brave.