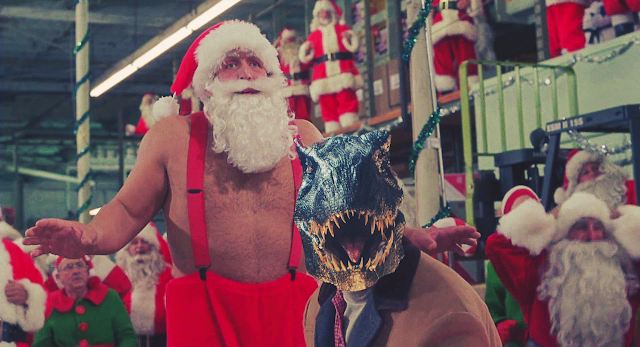 "What do you mean you can't do this?"

Dave did his part. He showed up, he looked presentable, or as presentable as someone could look whose main supply of clothing was the Lost and Found of the FightNYC tower. He had been able to retrieve both halves of a suit at least, however, neither one was the right size. His blazer too large and pants too small, both doing a fantastic job showcasing the fact he has on old, red converse and a F.B.I. gag T-shirt. There is no evidence of socks, however, he has chosen to carry his Bronx championship with him.

He exits the elevator, steps one whole foot into the hall, and then steps right back out. Dave makes a beeline back for the doors as they rapidly close, threatening to seal him to the fate and burden of possible social interaction. As he rushes for safety, a hand catches hold of him, dragging him with a scream, more high-pitched than he would have hoped under the circumstances, into the coat check closet.

Alice looks up at Dave, hands on her hips.

Dave pauses for a moment, not quite sure what was being asked.

Alice swats his arm, causing him to jump backwards. He rubs at the stinging pain.

"No, you skitebird, fok." Her finger pokes at the Championship belt he holds in his hands. "What do you call this?"

"And why did you bring it to the party?” She looks him over, muttering something in a guttural language he doesn’t quite understand.

“Shiny. Real shiny,” she grins, thrusting the top open to reveal the mask tucked in his pants. “You planning on going primal, papi?”

Dave shoves the oversized coat over the mask before inspecting his shoe for any lint that may have fallen free..

“I..” he looks her over, unsure of what to say. Alice hits his other arm.

"I’ve been swimming,” her confused look makes him try again, ”I got giardiasis.”

No response. Dave tries to match her intense stare, but finds himself unable to lock himself in with those piercing green eyes.

“It was a joke...cause of the...” He motions towards his stomach. Alice does not laugh.

“Yeah…hey would you…?” he fishes his phone from the large coat’s pocket.

“Are you acting the maggot?” she asks as he stretches the phone out to her.

“Yeah, I mean...I really don’t know what to even say…” She cautiously takes the phone. Dave untucks the mask from his waistband. As he stretches it out towards her, her lip curls in disgust. She places a hand up between them to halt it’s forward momentum.

“Okay, but I’m not wearing that thing.” she looks around the small closet and then at him, a sly smile playing at her lips.  “Actually, put it on and stand right there.”

Dave slides the mask over his face and stands against the wall.

“And take the coat off.”

As he slips the oversized blazer from his shoulders, Alice flicks the light switch off.

A flame flicks to life, causing the entire frame to flash white for a moment. As the initial burst dies down, Alice can be seen in the darkened room standing in front of the taller dinosaur.

“Are you familiar with the tale? Young Rikki-Tikki a mongoose so named for those noises he made. A chirp, a chitter? ‘A-rikki-tikki-tikki. A rikki tikki tik’.” She does her best to imitate the sounds made by the creature, “The mongoose saw himself as fearless and strong, the guardian of the garden. But at the end of the day? He was still a pet, a kept thing, right Ricky?”

She coos once more, softly.

Her strange accent begins to show more as she becomes excited.

“But fok, things weren’t as peaceful as Rikki-tiki would like: there were snakes in the garden.” She emphasizes the hissing sound of the serpent as she speaks. “Cobras. Killers. Snakes with a prize to be had, young Rikki-tikki heard. And so the mongoose made a plan - take the snake’s lives and steal the snake's prize.”

She steps aside, indicating the belt that the dinosaur still holds.

“Well, Ricky?” Alice looks up at his unmoving, unwavering face. “This is no garden and he is no snake. This is no egg and you are no mongoose. He is a monster and you are a man. Do you still wish to chitter and chirp?”

She walks closer to the camera, the fire still burning as she whispers.

“You will try but you will fail to defeat the dinosaur, for he is mighty. He is brave.” She begins to fight a smile, forcing her to pull away. “He is Dave.”

Alice has to turn from the camera as a smirk pushes itself onto her face. Dave looks down at her from under the mask. She continues to lose herself in laughter and he finally shrugs his shoulders in protest, pointing at the frame. “C’mon.”

Clearing her throat, she turns back to the camera.

“Come..I invite you to try: slay the beast and take the treasure. Bite, claw, scratch, gouge his eyes. Bash his face into those gingerbread walls, break them down, take his treasure, if you dare. But beware.”

“Just pretend you’re scary!” she whispers back at him. He lays the belt over his shoulders and brings his hands, or rather, claws up in a talonlike grip. “He has evolved, Rikki-Tikki. He has been watching and he has been waiting for this time. He is here to show the world what it means to be a true champion. To show this belt the respect, the honor, the dignity it deserves…the dignity of a dinosaur.”

Dave does his best to roar which makes Alice cover her mouth with her hand. Her shoulders shake with laughter as she struggles to regain her composure.

“And so my little mongoose I must apologize as he has broken the food chain and he will break you. He has disrupted the natural order and he has shown the world exactly who he is. A competitor!” Her voice gets lower, almost growling as she speaks. Her green eyes turn pitch. “A conqueror! The tyrant lizard himself setting his place and staking his claim here, right here, as the true guardian. Not of some glamor garden, but of the gold. The greatness. The glory that it brings to truly be a King.”

A growl comes from behind the mask. It is deeper, more primal than before.

“Come into the lair Ricky, he’s waiting. Fat or lean, scared or mean: he’s ready. He’s watching and he knows.”

The flame goes out and her voice can be heard whispering in the darkness over his loud, purring growl.

“A-rikki-tik, a-rikki-tik.” The flame bursts to life, now behind the camera, which slowly moves forward. At the edge of it’s light, lurking in the darkness, Dave stands facing away. The dinosaur head slowly turns. “A-rikki-tik-“

Her chattering stops. The light goes out.

“And he is the monster!”

Flashing back to life, the fire reveals the dinosaur rushing towards the camera before cutting to black.

Vaguely aware of where he is, Dave blinks his eyes as Alice peels the mask free from his face. She had moved out of his way as he rushed forward, causing him to ricochet off the door and land right onto his rear.

“Did that look cool, at least?” He asks, rubbing his head. She drops the mask into his lap before turning her attention to the phone.

“Are you editing it?” He asks as she continues to type. Dave retrieves his belt from the ground and pulls himself up just as she finishes. She tosses him the phone.

“You didn’t edit it?” She shakes her head, “Well…you think I have a chance?”

“But you have heart, David, and that goes a long way.”

Suddenly, the door bursts open. Anne Boleyn, with the recently vacated Brooklyn title, ducks inside. As she pulls the door shut, she lets out a sigh of relief before her mouth opens in shock.

“The dragon!” She says, her attention turning to the gold he has lain back over his shoulder. “The treasure.”

She remembers why she came into the closet and clutches at her own trophy. Alice looks to Dave and then back over to Anne. She points towards the Brooklyn belt.

“You trying to stash that?”

“No. Yes,” There is a loud eruption of noise from beyond the door, likely one of the more popular wrestlers arriving. Anne pulls the belt against her as Alice raises an eyebrow. “It is mine and I wish it to be in a safe location.”

“Right,” she grins, “Sure, choomba. That’s your business. You know, they say the best place to hide something is in plain site.”

“You know a blacksmith?”

“Imagine that,” he starts but Alice speaks over him.

Anne’s eyes become glossed over as she holds the belt up.

“We need a distraction.”

Dave does his best to occupy himself with arranging the shelves in front of him. The two women turn in his direction. He looks over as Alice pulls a Santa outfit from one of the hangers.

“I have an idea…” she says, and the two women close in on the dinosaur.

Moments later, the door bursts open. Dave tumbles forth. His dinosaur mask is over his face and on top of the already messy coat, he wears the bright, red coat of ol’ Saint Nick. Each button of the coat is in the wrong hole, giving him a lopsided appearance, amplified by the matching hat taped to the top of his mask.

Unable to see, Dave barrels straight into a waiter, driving him backwards. The waiter, desperate for his own survival, flings the loaded tray into the air, which comes crashing down in front of a pair of coal black boots.

A large, burlap bag drops to the floor.

The champion is able to adjust the mask enough, looking up just in time to see a large man with a white beard, followed by five knuckles and a flash of light.

Ear clutched in the grip of one mitted paw, the monstrous man from the North Pole drags the terrible lizard behind him. Kicking the front door open wide, he shoves Dave out onto the sidewalk. With his mask on backwards, the Bronx champion can do little but stumble before crashing into a pile of trash cans.

Santa pops his coat off, revealing a large pot belly and two massive trunks for arms. He raises his fists up as Dave stumbles to his feet.

“You want to make fun of Santa’s, do ya?” The dinosaur is able to turn before being caught by the furry lapel.

“Santa please…” a crowd begins to gather around the duo. Dave is pulled in close.

“I think it’s about time for a little…”

Santa’s massive mittens begin to drill into the dinosaur to the delight of the crowd, nobody noticing the manhole cover sliding aside to allow the two women to slither into the sewer. As it slips back into place, the wheels of a classic, midnight blue Rolls Royce come to a stop just above the sewer entrance. 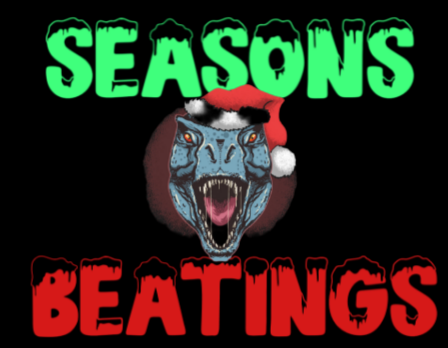 *Explosive diarrhea of an elephant.